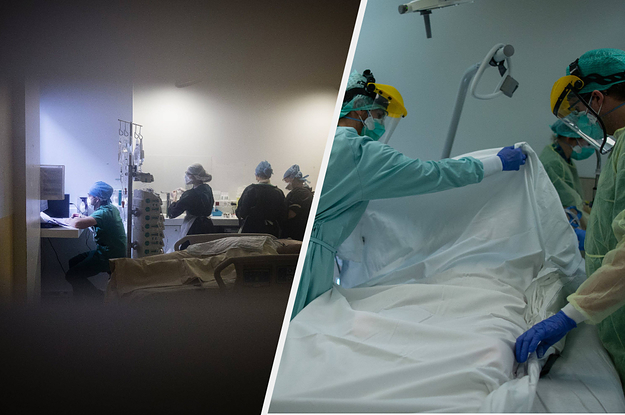 “We do pass things on if we can,” said Luke. “We tell the patient whether they’re awake or not, when we’re changing them, when we’re putting in a drip or sorting out the ventilator.” He adopts the cheery, everyday tone he uses: “‘Oh, your wife called, she is worrying about you. You’re going to have to really get better soon.’”

The calls from family members can be practical, to help staff provide the most effective care: telling them their father or wife hates needles, for example, so nurses can keep that in mind when taking blood.

But it can involve delivering the most important message of all: that they love them. That always gets passed on, he said. “Any time that we have anybody call, we reiterate [to the patient], ‘We’ve had another call from your partner or your kids. They’re missing you. Hopefully they’ll see you soon so you’re going to have to hold tight.’”

Messages can travel the other way, too. If a patient’s condition is looking more hopeful, a member of staff will often let them know they’re going to tell their wife or son that they’ve come round.

Even the tiniest forward steps in treatment make all the difference to staff, he said — “when someone can squeeze your hand, when someone can respond to you”. And if a COVID-19 patient’s condition improves markedly, it uplifts the whole department.

“It’s the most insane kind of feeling for everyone in the ward,” said Luke. “It’s news the whole night – the whole week — that this patient might be able to leave. It’s something to cherish.”

He remembers one patient in particular who was being prepared for discharge. “The whole ward was on fire. It was palpable excitement. Every time their stats went up to a higher level and we could bring the oxygen down everyone was like, ‘It’s going to happen!’” He made a note of what the first person said when they made it out of ICU. “They were able to mouth it,” he said: “Thank you.”

But the reason for such excitement, at that point in late April, was simple. “We didn’t have a single person leave for weeks.”

The proportion of patients improving and leaving ICU is increasing now, he said. But every day, death remains the reality. Luke, like all the staff, will come into work after having cared for a patient for many days, sometimes weeks, and be told the news by a colleague: “They didn’t manage.”

The unpredictable trajectory of COVID-19 means sometimes this can happen quite quickly, even after showing signs of recovery — but either way, they do everything possible. “For the majority of people we keep going even though the signs are hinting that they’re not doing well, because people can pull through,” he said.

Without intending to talk about the effect of all of this on clinicians, Luke began to depict what life for him and his colleagues has been like since March. He spoke of the physical demands in the ICU, particularly for nurses, healthcare assistants, and junior members of staff.

“The shifts are hard,” he said, “You have to wear this [hazmat] suit, you’re hot, you’re trying to hold someone or move something.” They wear hazmat suits, he explained, because they ran out of surgical gowns. Some COVID-19 patients are on kidney dialysis and need bedding to be changed regularly. “So you’re desperately changing all the bedsheets but at the same time your gloves are so soaked in sweat that they’re falling off and you’re trying to keep your visor on.”

Nurses in particular bear the brunt, physically, he said, with hours at a time in masks, goggles, double gloves, and visors, “drenched in sweat” doing the “very best they can” and trying to help each other. Their sheer practical skill has left him astonished. Early on, while attempting to wash and turn a patient while ensuring the lines and tubes didn’t become detached, a very experienced nurse intervened.

“She just grabbed something from me and did the most amazing manoeuvre of washing and holding the patient up and was like, ‘You need to hold this and you need to push as hard as you can!’” Luke obeyed as quickly as he could as the nurse turned to him again. “She said, ‘You need to realise this is wartime nursing now.’”

Uber may continue to operate in London after winning legal appeal

Execution fraud and the duty of caution in real estate acquisitions –

Uber may continue to operate in London after winning legal appeal